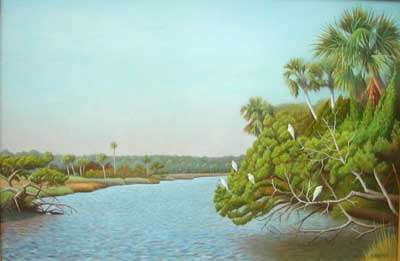 The aroma of a backyard grill blends with salty air and takes me back to southern April afternoons when cares were few. Childhood days on my grandma Dewey’s beach-side back patio. Apricot sunlight bathes her fragrant magnolia blooms. Easter lamb grilling on the rotisserie over a charcoal fire. Ice tinkling in a cool glass. Laughter bounces in the spring air.

Memories of days like these made me a painter of peace, beauty and light.

Both my grandparents lived a block apart. Both from immigrant ancestors. The English Dewey’s descended from the Puritans on my mom’s side and the D’Ambrosio’s sailed from southern Italy on my dad’s. Grandma Dewey and grandpa D’Ambrosio lived the longest. I was fortunate to spend most of my life with each of them almost daily.

My studio is a mile from both their homes and just across the road from the ocean. Their stoic humor and saltwater hours define my being.

Brightwater is a large oil painting I did in 2004. I painted it from the place my Italian grandparents, parents and siblings would go crabbing on Sunday’s in the spring when blue crabs were coming out of the mud after winter. We would stop at Johns Market on the way to pick up chicken backs and necks then drive along the river under a canopy of moss draped live oak trees to our crabbing spot on Bulow creek.

Tying the chicken to a length of string wrapped around a stick,  we’d toss it into the shallow water and hammer the stick into the riverbank and wait for the crabs to latch on. I learned patience. Gently, ever so gently, we’d ease the crab in, hand over line until it was close enough to snatch with a net on the end of pole. Sometimes the crab was quicker than us.

Afterwards, we took them back to my grandparents’ house and steamed them until they turned bright red. Spread them out on newspaper and pick the meat out. Grandpa made homemade pasta and tomato sauce. He would simmer the crabmeat in the sauce until it infused it with an aroma that makes my mouth water just thinking about it fifty years later. He taught me that simple ingredients can make the best meals.

Grandpa died in 1997 just shy of his 100th birthday, and my dad died 2 years later. One Sunday morning, I went down to the place we used to crab when I was a child. I painted a little study, and from this Brightwater was born.

Bright April days will come again. I look forward to the afternoons we will gather around a grill with families and friends and tell each other our stories.

How about you? Do you have a favorite outdoor memory to share?