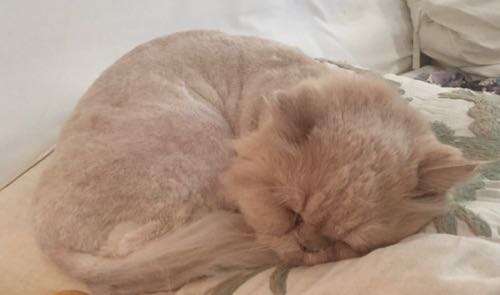 Puppy came as the best things do, by fortune or divine guidance. His rescuer was her then husband. Her father went to the Humane Society with him and described seeing the cat for the first time. He had just arrived. His hair matted and caked with mud. Full grown but young, maybe a year or two old.

His new owner took him to live in their home by the sea. In 2004, while they were out of town a hurricane struck the east coast. The roof blew off the house and when they returned Puppy was under the rubble scared and wet.

They divorced and in 2006 Puppy entered my life. He came with a kitty name but he behaved like a dog. So we called him Puppy for fun. Soon he ran to us whenever we hollered Puppy. I taught him to sit, lay down, rollover and come when I whistled.

Our first Easter I bought her white lilies not knowing they were toxic to cats. I’ve had cats all my life and none of them ever ate the house foliage. Puppy loved to eat plants and plastic. He almost died and spent 2 weeks in intensive care at the cat hospital.

When we lived in the mountains of North Carolina, I brought in some fall leaves to study their color and placed them on the hardwood floor. A streak of fur shot out from underneath the couch and rocketed across the room. In an instant Puppy swallowed the leaves.

She had Randy the groomer trim his hair in a lion cut. I thought he looked silly. His body shaved except for the tip of tail, a mane wrapped his head and his feet resembled boots. But he liked it and strutted through the house with his tail held high like a royal scepter.

My daughter and I tried to give him a haircut once. I was barefoot, and he dug his back claws deep into my foot. A few days afterward my toes turned bright red then purple. About a week later my foot swelled, and the redness had run up my shin. I went to the emergency clinic and the P.A. said it could be MRSA and told horrifying stories about people having toes and fingers amputated. She sent me to a podiatrist who cured me with massive doses of antibiotics. Dang cat! I continued taking him to Randy the groomer for his lion cut.

In springtime he loved to sit at the screen door and watch lizards and birds. In winter when sunlight fell on the floor or furniture he would find it and stretch out in its warmth. 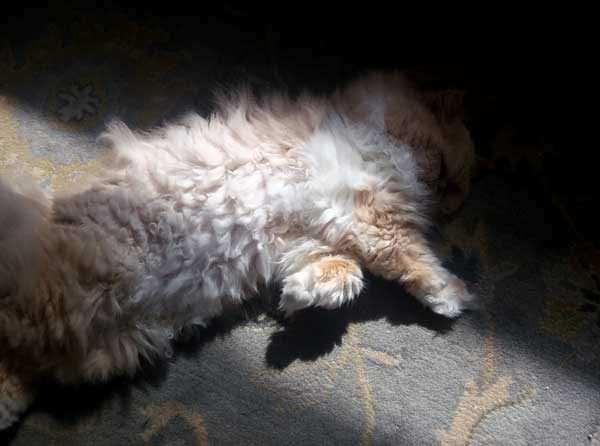 After breakfast each morning he would dash about the house sliding on the floors. At times he was annoying. When you were most focused on something, he would climb around you crying for attention.

Every time the front door opened he tried to escape. He was quick. When we lived in a condo, he got out several times and scampered along the walkway to the stairs then stop and sit not knowing which way to go. We’d call him and he’d slink back inside.

During a drizzly November after we moved to the current studio, he slipped out and was lost for more than a week. I made signs and posted them everywhere, offering a reward. The city was laying utility pipes and stored them in a vacant lot near the house. One night in desperation we searched around them and found him huddled deep inside a pipe.

He was always by my easel or following me into a room. When I came home, he trotted out to see me. In the evenings, upstairs, we would relax in my chair before bed. In the morning when he heard me stirring he would bound up the stairs and greet me with a little meow as he padded into my bedroom.

In 2016 a hurricane hit and we had to evacuate. He and I camped out in the bedroom of friends home. When I went to Maine the following year, I hired a pet sitter to take care of him. Another hurricane hit and she and her family had to evacuate and could not take Puppy. I worried until my good friend Wally picked him up and took him to his house until I returned.

So I started taking him on trips. 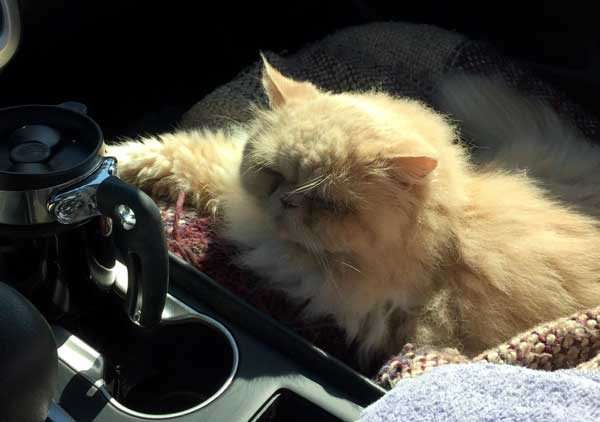 And when I traveled to Maine this past August; he came with. He was the best traveling companion. Sleeping or laying in my lap for hours in the car. At night in a hotel or wherever we stayed it was a great comfort to have him in the room with me. He was my little buddy. He made friends with everyone he met.

As he aged he had trouble leaping up on the couch or chair and would sometimes fall back. Two years ago he started having seizures. My veterinarian put him on phenobarbital. He stopped having seizures, but he slept more. This year I noticed changes in his behavior and he lost weight. He acted confused and some days he did not greet me when I came through the door. Some nights he didn’t come upstairs and I didn’t hear his little feet thumping up the wood stairs when I woke.

The week of Thanksgiving he stopped eating and slept all the time in his little basket house. I took him to the vet.

I don’t know his birth date. But I will always remember my face pressed against his the moment his heart stopped beating at 3:08 p.m. November 26, 2018.

With tears streaming down my cheeks I looked up at the window high in the vet’s wall and saw an oppressive gray clouded sky. Twelve years he had been with me. Memories flickered across my mind. All the places, his antics, his presence. His tie with the past.

He was my sweet boy. It’s only now Puppy is gone do I realize the bond we shared, and I believe in his feline way he loved me. 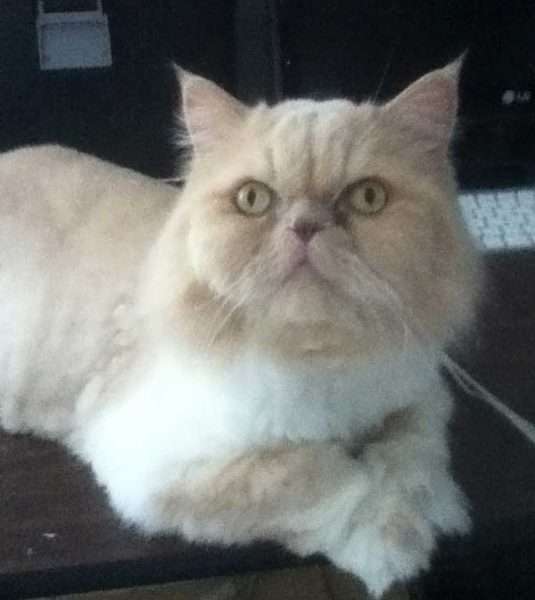 ← Are You Subscribed to Ambrose Art Journal? Nine for a Kiss →