The Art of Daniel Ambrose 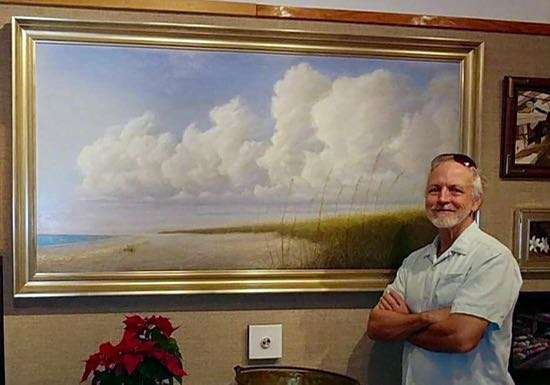 After a harrowing four hour drive through thunderstorms and frenzied holiday traffic, I finally delivered my newest painting, Summer Remembered to Hughes Gallery.

Summer Remembered is one of a new series of large oil paintings based on a July research trip to Florida’s west coast.

The first couple of weeks, it rained everyday, most of the day. I was expecting blue skies, aqua water and spectacular sunsets.

After griping on the phone about gray, gloomy clouds to my friend Mary Erickson, who generously allowed me to use her studio in Venice, I finally decided to embrace the day.

Because of the intermittent weather, I had little time to set up and paint studies between rainfall. Instead, I used my sketchbook to record rapid color notes of storm clouds. I’ve another large painting on the studio easel based on these sketches.

Painting rapid color studies in my sketchbook is a technique I have been using for decades.

Early on in my painting practice, I realized the limitation of cameras to record quite subtle distinctions in color, light and shadow. Unless, you selectively adjust the camera, it indiscriminately records everything in its viewfinder.

More importantly, I also learned early on, that if something in your path catches your eye, and you think that you will come back to paint it later, you will find that the subject won’t look the same. The way it appeared in that particular moment in time was “It.” It, won’t happen again. It’s gone, baby.

And we are humans beings, dang it, not mechanical instruments. We filter our life encounters through all of our senses. We think and feel, intuit and express ourselves as humans. Through our art we connect and relate to one another personal expressions of our life experiences, our discoveries, our intense joys and our inescapable sorrows. We share stories of our humanity — transmitting our ideas and emotions along the eloquent avenues of painting, poetry, sculpture and song. In our art, we learn from each other that we are more alike than we are different.

The last two weeks I was on the Gulf coast, the sky turned blue. The sun came out and warmed the land. Fair weather clouds formed over golden green grasses and floated toward the sea like a celestial ship carrying a cargo of freedom and opportunity.

I felt my sodden spirits stirring, felt the sun of many summers laughing on my shoulders, felt those tender sea oats swaying in the breeze, felt the limitless possibilities of that blue sky.

I saw in those those clouds visions of every fine summer. 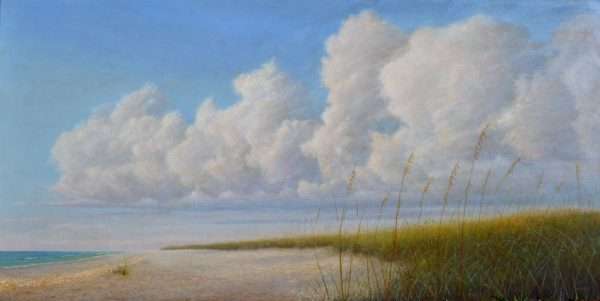 ← The Kiss of Life Romancing the Sea - Solo Show Opening →