The Art of Daniel Ambrose

Waiting Out a Storm, Oil Sketch as Evening Falls 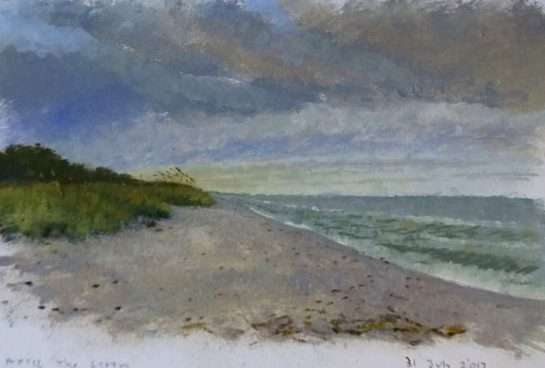 After the storm as evening falls, oil sketch from the journals of Daniel Ambrose

Sitting in a cafe, cup of black coffee in hand, hardcover sketchbook open on a thick wood table, I wait out a tropical storm. Reviewing recent drawings of the local beach, and making notes from a book I’m currently reading by Thich Nhat Hanh, The Art of Mindful Living.

Lightning and wind have been lashing the area all morning. Churning up white waves on a typically placid sea. Through the cafe’s blurry windows, gray and ghostlike objects emerge then melt away. 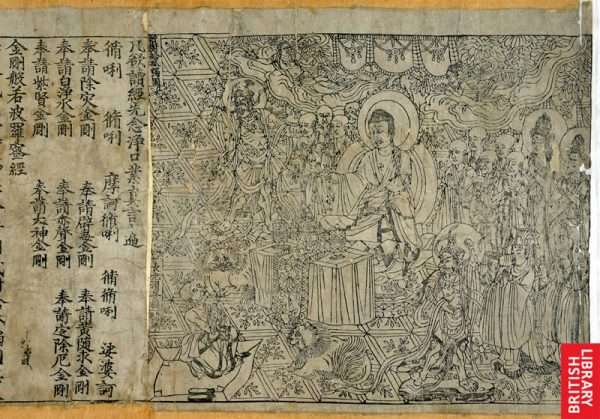 Diamond Sutra from the British Library

In Thich Nhat Hanh’s book he mentions the Diamond Sutra. Over 1,000 years old, it is the world’s oldest dated printed book and resides in the British Museum. I order a translated copy from Amazon via my phone. Order a thousand year old text in seconds on a tiny electronic device with more computing power than NASA used to put Neil Armstrong on the moon. In a few moments this ancient text is delivered to my Kindle. With a few clicks ignorance is abolished.

While some good things remain.

At a counter running lengthwise along the cafe windows, a young couple eat breakfast. They get ready to leave. He takes off his camouflage coat and places it over her shoulders. She stands and slips her arms through its sleeves. He pulls the hood up over her head and cinches it snug. She turns and smiles at him.

The couple walk through the door into the rain and disappear in the mist.

Almost 13 million dollars were spent this year restoring sand to storm ravaged beaches around here. There is talk of desirable sand supplies being depleted. Communities are running out of sand and money. Last year, federal legislators passed the Water Resources Development Act that allows funds to study if it’s feasible to bring sand in from foreign shores like the Bahamas.

I wonder how the Bahamians would feel about it.

Billions of pounds of garbage are accumulating in vast rafts in the ocean, billions of tiny particles of plastic are gathering on our shores. Plastic that was not there when I played on the beach as a child.

The communities restore beach sand to protect property values and tourism revenues. The sand is covering up ancient shark’s teeth sun seekers like to collect. I wonder if plastic particles will outnumber sharks teeth in the near future. Million year old shark teeth versus half a century old plastic.

What will writers and other artists of the future say about our time?

The rain is slacking, the sky is breaking apart and I am going to paint the beach after this storm.

Or is the storm just beginning to gather?

I close my sketchbook, push back my chair and get up to leave.

Lord Huron trails me out the door. . .