Before I Sleep. Egg tempera. Beginning stages of repainting.

It was coming on the end of day and I was heading home. Ahead lay about 600 miles of road. At the top of a mountain just outside Spruce Pine, North Carolina, I paused. It was the summer of 2010.

Gazing down into the valley, I suddenly wished I could spread wings and sail home, soaring over rivers and roads. The leaves beside me stirred in the breeze, and a dusky memory swept into view. A sunset—a night sleeping under the stars in Death Valley—A time when I was an adventurous, 17 year old wandering the West in an old Chevy van. Far from the sea.

Over the next several years I made a couple of paintings of that reflective pause atop that Appalachian rise just outside Spruce Pine. 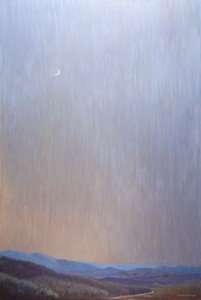 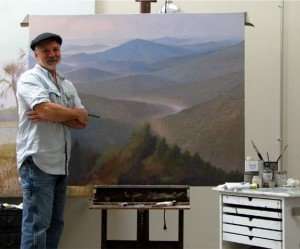 Ambrose in studio with Going Home.

That one quickly sold, while Crescent Moon lingered on until I decided to cut the top two thirds off. I reworked it and renamed it Miles to Go, part of a verse from my favorite Robert Frost poem.

In hindsight I realize my concept of home was tangled up like a twisted string of Christmas lights. Amid tumultuous changes in my life, home had become a notion, not a location.

During the winter of 2004, I lived in the empty house of my grandma Dewey and used the living room as my studio. I brought all my paintings and leaned them along the walls around me.

At night I slept on a couch, surrounded by my paintings. A comforting glow encircled me, as if I was enveloped in a luminous, serene bubble—in the genial company of old friends. My paintings emanated a vibrant, organic presence, and I experienced the emotional power of art to elevate the human spirit.

In the mist of that blue winter, I felt the inner light, understood the alluring mystery an original painting held to arouse and soothe the senses. 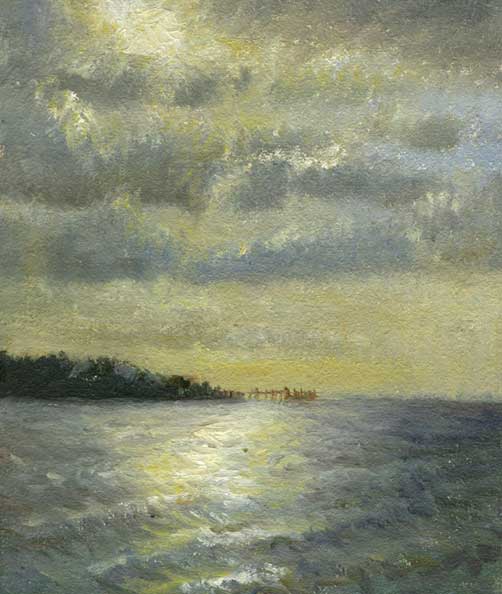 This summer, as I left for a painting trip to Maine, I pulled the tempera painting, Miles to Go from the wall, and took it with me intending to work on it further.

While in Maine, I shared a house with a group of professional artists who I admire and respect. Painting, dining and laughing with my peers felt like a family reunion, minus the name calling. It felt like homecoming.

The morning I left Maine, I went down to the harbor to watch the boats arrive and depart. Like six years earlier on top of that Carolina mountain, I thought of the long drive ahead of me—the home I was coming back too. A serene structure close to the sea, filled with beautiful paintings and a sweet cat with a brain tumor who might be wondering where I was.

My idea of home has changed direction over the years. I recalled being a restless kid crisscrossing the country in my old Chevy van. Traveling deserted winter back roads, in the bluing dusk, I’d see the amber light of windows appear in the raw, twilight void. As I passed through town, I could see families moving around inside the warm rooms. Then I turn to look at the dark road ahead of me and drive on, searching for another place to sleep in the enfolding darkness.

“Home is a perjury, a parlor trick, an urban myth” — Conor Oberst

During the 25 hour drive south from Maine this summer, I pondered the painting Miles to Go, and my 3 attempted iterations of that journey home I began that summer of 2010. What was it about? What was I trying to say? Maybe I’d been traveling down that road for forty years.

When I hit an ominous thunderstorm passing through the Carolina’s, and I could not see the road, the word “longing” came to mind. How do you paint that?

I realized I never was trying to reproduce the landscape with those paintings. I was trying to paint a feeling of longing….Or is it belonging? The same feeling I get being with my friends at Nanatuck house in Maine.

Humans are tribal souls that have sought connection with each other since our beginning. Don’t we all want to belong to something…to someone? Someone who is a witness to our life? A soulmate?

The day after I returned to the studio from Maine I started repainting Miles to Go.

Miles to Go, Before I Sleep, egg tempera work in progress.

I’m still chewing on it and have a ways to go painting it, but I thought I’d invite you on the journey.

The second part of the verse in Frost’s poem is “before I sleep.”

Home is not where you are—It is who you are with. Home is connection.

Home is a kind heart.

I have learned to carry home in my heart,

but I still have miles to go…