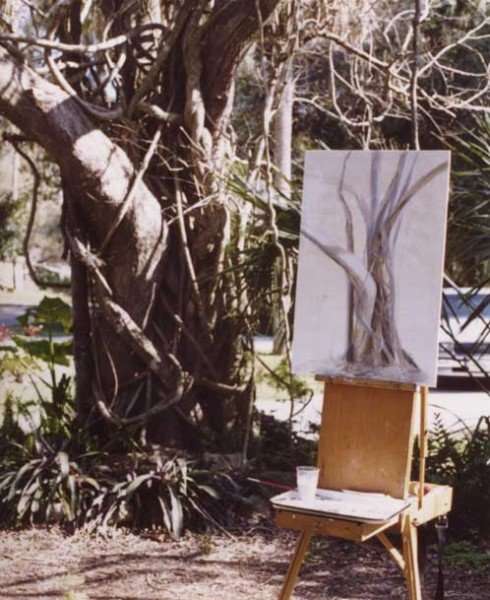 Two questions I am often asked about painting in egg tempera are:

2. How long does it take me to make a painting?

The painting on the french easel in the photo is an egg tempera I began about sixteen years ago. Its still in progress.

Yes, you can paint egg tempera plein air, however, its pointless. Which is why its probably taken me sixteen years to paint the darn thing.

Question one came up today as I was being interviewed by Eric Dusenbery of Cinderic Documentaries for an upcoming exhibit commemorating Florida’s 500 anniversary.  Actually, I think I imagined the question while he was asking me a totally unrelated one, which remind me of this painting. . . Go figure.

As I mentioned earlier, after moving into the studio and unpacking, I rediscovered this painting. Its much further along now and I’ll post a photo and talk more about the inspiration behind it in another post.

Its been in my studio for a few months now and its like getting reacquainted with an old friend. I was talking with another artist friend about it the other day and she asked me if I would change anything on it after sixteen years.

Either I’m going backwards in my work or I just managed to pull off a good one the first time, but I told her no. Maybe, add an element to adjust the weight, the visual balance, but other than that, I’m good with it.

In fact, my initial excitement reignited and I’m fired up to get working on it again. The idea, the reason for beginning it in the first place is still there. Like an unconquerable love, it remains with you.