Or particular mornings and people. 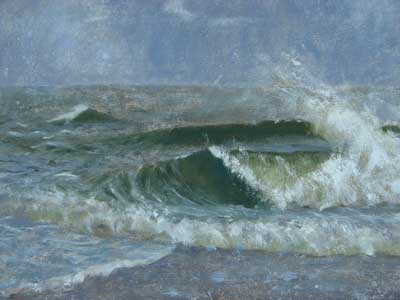 While I was in Maine hanging round the harbors and coves painting stuff, I was thinking about the beach in Florida. For a few years during the Great Upheaval in my life when I lived in the woods, each morning, I dashed to the beach before sunrise. I painted lots of tiny color sketches of the sunrise, most sold before I documented them. I regret not photographing them. I had scalpel surgery on my left eye a couple of years later and may never paint anything like them again.

I had blank brains at the time and didn’t think any further than I simply wanted to record the colors of each new day as it broke. Every day was a new promise. A chance to start over.

After awhile I moved inland away from the sea and to the mountains in search of new inspiration.  In North Carolina I’ve found subjects I want to explore further, and now in Maine there is depth.

Looking at Florida in my mind from the distance of time in rural Maine and North Carolina made me realize how much of ole’ Florida has been lost in my lifetime. The things that initially inspired, the places I naturally was drawn to paint are gone or surrounded by stuccoed concrete.

So what remains for me to paint in Florida?

Ahh . . . There is still the water, the air and the light. I find I’m back at the beach again where all these elements exist. The eternally changing, comforting continuity of the sea is beckoning me again.

The great marine painters Winslow Homer and William Trost Richards primarily painted the sea later in life. I’m not aligning myself with them, I don’t reckon I even belong in the same paragraph as these two giants. But I do feel a kinship and maybe an inkling of what drove them to the water’s edge.

This is a big step for me. I have some new ideas and I’m going to risk letting you in on the process. I don’t think its good for painters to talk about what they are going to paint. Why paint it if you can write about it instead? But since I’m not really sure I know where I’m going, I figure — what the heck — it may just fizzle out like waves coming to shore, but it might lead to something  fun and interesting.

So in the spirit of all marine painters past and present here are my initial studies of waves forms of the past few days. This is visual evidence of my thinking. I stole that sentence from Don Demers. Thanks Don! 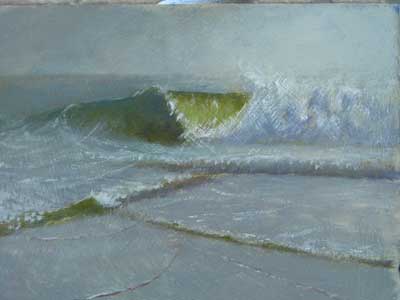 The painting at the top of this post is the first one I painted. Hurricane Isaac was passing along the west coast of Florida causing stormy skies and confused seas on the east coast. Everything was gray and I tried to make sense out of the sloshing water.

The painting above was done a couple of days later when the seas had calmed down.  I was interested in how a wave peels and the moment it breaks and also the diffraction and refraction patterns as spent waves run upon and recede on shore. 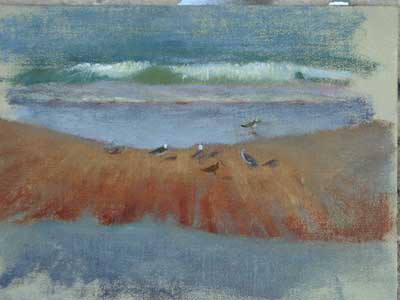 This is a 20 minute oil sketch of gulls resting on a sandbar. A drunk lady came up hollering at them and scattered them before I could finish. She glided over on her way back and asked what I was painting. I said the birds until you scared them off. She laughed and then asked if I would take 5 or six dollars for the painting. Not understanding why I wouldn’t, she left perplexed but came back and asked incredulously, ” you mean you wouldn’t take 5 or 6 dollars for that painting?”  Her breath was beginning to peel the paint on my panel. I politely said no, I was keeping it for a study. Her husband the tall man with patch over one eye and legs like the gulls gave a a bourbon-laugh and they floated away. 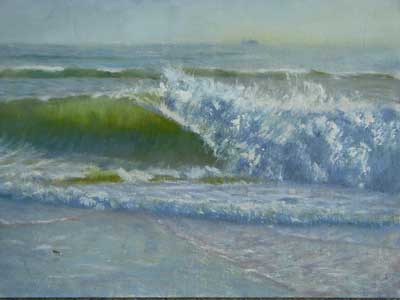 I painted this one this morning. Mostly I was going for the lip of the curl and the light of the sky as it moved throughout the water. I got wet three times but some surfers came over and gave it a thumbs up — said I got the color and the wave just as it was, which was my intent.

It was all about the water, light and air of that particular morning.