Sunday’s I visit with my grandma Dewey. She turned 102 last July, same day as my twins birthday. She lives in a nursing home that is surrounded by moss draped live oak and swaying palm trees, and once was a pasture for cows.

I park and cross the wooden footbridge and enter the automatic doors before turning and walking down the bright antiseptic corridor. A while back, they repainted the place and replaced  the artwork on the wall with nature scenes.  Wheeling my grandma down the hall one day, I commented on the decor and asked her which picture she liked best. She pointed to the color coded fire escape plan, and said,  “I like that one.”

She always makes me smile.

I wonder how I will find her today. Often she is in bed sleeping, a cat-like dreamy sleep. Sometimes she is alert, talking and asking about family. Other days she is somewhere in the past, and I get delicious insights into her history.

Weaving through the wheelchairs, each one, a thousand stories, I turn the corner at the nurse’s station near her room. She is sitting in a wheelchair in the middle of the hall with a bright pink straw hat on her head, and a big smile on her face .

Always, she is glad to see me.

On another Sunday morning, thirty-eight years ago, I called her to see if she was home, as I was gong to ride over on my motorcycle.

Picturing the best tasting scrambled eggs I’ve ever had, the ones she makes with brown eggs, placed next to a side of crispy bacon, made my mouth water. I asked expectantly.

“What are you having?”

“That would be lovely dear.”

I hopped on my bike and roared into the green spring sunshine. Over the bridge to grandma’s house. When I was seven, and she was fifty-five, an ancient, unimaginable age from the perspective of my child eyes, she sometimes rode a bicycle over to our house. Coming down the bridge she would put her feet up on the handle bars. I will be fifty-five this year. The bridge spanning the gap of time between our ages, appears to be accelerating. Off the bridge now and heading down Halifax, past the fire station, with the water tower in the back. She always said it looked like a martini glass. When I got to her house I parked my bike and walked up the drive, the macadam as she calls it. She has formal names for things, insisting that a couch is a divan, a bench a settee, and porch a portico. I headed to the back kitchen door the way we always entered grandmas’s house,  never through the front portico.

I rounded the corner and she was sitting on the back patio, Beside her on the table sat a pitcher of Bloody Mary’s, a celery  stalk in her glass. She looked at me with a smile.

My grandpa Dewey died on February 14th, Valentine’s day. I remember him as a tall man, square shoulders, and long elegant fingers. He served in the Navy and had a large, spread eagle, tattooed on his chest. She was his second wife. I asked him how they met once. He said he was traveling through Chicago, and had just got off the bus and was standing on the sidewalk. Suddenly, across the street, a bright yellow dress bounced out of the department store across the street and started walking down the sidewalk.

“I just started following that yellow dress,” he said.  Grandma laughing, said she may have been sashaying a teensy bit.

She called him Pap and he had overseen their financial affairs. After he died, she had to learn how to manage her meager finances, and humbly, take a part time job at Sussman’s, the clothing store she used to patronize. She was always classy, from another era, I associate the word dignity with her image. We often talked about him, and she hid her pain from me. But in the springtime, when Sunday morning rolled around,  she sat on the back patio across from the cold, charcoal grill from which they had once shared many meals. She’s a strong woman, but sometimes, as the world awakened, and sunrise penetrated the dark limbs of the magnolia, and transformed dew suspended upon its leaves into opaline pearls, and while bright songbird’s bathed in their water. . . she took pause.

Their house was small, but well kept, it had high ceilings, simple Asian decor,  and they kept the outside painted blue. In the backyard, at the end of the drive was a single car garage, where they kept their 1964 Valiant. Grandma had to learn how to drive it too. On the side of the garage was a decorative concrete wall that hid the garbage cans. Grandpa had me whitewash it once, showing me how to mix the hydrated lime and water, being careful not to burn myself. Then I slopped it on with a big broom like brush, careful not to get it in my eyes. For our birthday when children, my brother, sisters and I followed a tradition of spending the night at their house. For my birthday she would take me to lunch at my favorite place, Morrison’s Cafeteria, where I got to stuff myself with prime rib and lamb, a rare treat.  I slept in a little room that had red carpet. I’d fall asleep listening to the sound of the surf  and in the morning wake up to the room bathed in a rosy glow. It was like being inside a Chinese lantern. Outside near the window was an old cedar tree, sculpted by the ocean breeze. In the spring it would fill with migrating cedar waxwings. She introduced me to coffee when I was nine and we had long conversations together at the dining room table while I drew muscle cars on a piece of paper. I would tell her my concerns and she patiently listened. One day I was babbling on about something of supreme importance in my nine year old life, she looked at me across the table and said, “ you will find that not every one thinks as you do.” Now this was a major revelation to me as I assumed everyone thought as I did, just like everyone’s grandparents should live near each other. It only seemed natural.

As the years passed, occasionally I would come to her for advice, usually involving having to make a big decision. Once, she shocked me by telling me to sh@!t or get off the pot. Another time she told me quite simply that, if something wasn’t adding to your life, maybe it was detracting from your life.

She had a huge cat when I was child that she kept outdoors and only let in to feed. She tied a bell around its neck so it couldn’t sneak up on the birds. She called it Tinker Bell. A couple of decades passed.  In my late twenties, she and I were sitting at the dining room table when a huge cat ambled in.

“Why that’s Tinker Bell,” she said.

I think she had that darn cat for close to twenty-five years. It was a given, like it was something certain you could count on to always be there. Another twenty-five years have passed, and I have had my share of misfortune, and too, I have been given the blessing of  many years with my grandma, Wanetta Dewey. She has always been there. . .  adding to my life. 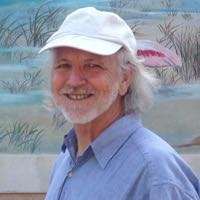 Already get my blog posts?... Thank you for joining us!

You have Successfully Subscribed!