The end of the year is a good time to clean up the studio and go through old sketchbooks. 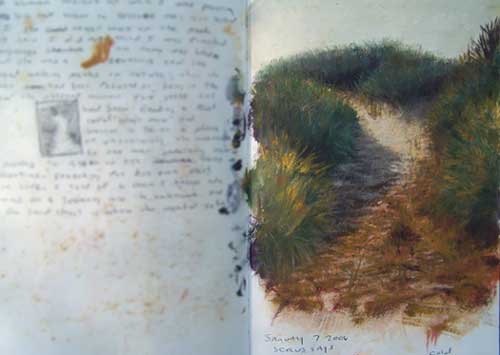 While going through my sketchbooks I found this study from January 2006. I thought I’d share it with you and give a peek into my inspiration process. I used this sketch as reference for an egg tempera painting titled Dune Path.

While painting I often make a note of the weather, wildlife and women who appear out of nowhere. Yes, that’s right; a woman emerged out of the palmettos startling me and scaring off the Scrub Jays I was about to put in the painting. She started talking about paths; I’ll share what she said in a future post on my website. If you subscribe to my weekly blog posts via my RSS feed, you’ll get to read her interesting remarks as soon as I post them.

I’m pleased to announce I am now represented by the Hughes Gallery in Boca Grande, Florida. The tempera Dune Path is available at the gallery.

Reflections II: Watercolors of Florida 1835-2000, from the Collection of Cici and Hyatt Brown is ongoing at the Museum of Arts and Sciences in Daytona Beach, Florida. The show will be open until March 25, 2012. I don’t have a pony in the show, however, it’s worth the trip if you are in the area.

Wishing you all the best for the New Year.